Fractionation of natural habitat and landscape uniformization – or: what do vaccination and pollination have in common?

Natural habitat fractionation is one of the factors that hugely transform ecosystems, putting them under huge pressure and can drive species extinction1. It consists in a reduction in size and in distribution of spaces with certain characteristics, from native forests, prairies, wet ecosystems to hedges, to the advantage of urban structures as buildings and roads and of extending agricultural surfaces. It is often combined with an additional simplification of the landscape, i.e. straightening of water ways, the disappearing of their edges, the uniformization of planted crops on species and genetical level. Pollution from transport, industry and agriculture often contribute to the additional diminution of natural spaces. It is a phenomenon that happens at all scales and in all parts of the world to different extend2. Fractionation of natural habitat and landscape uniformization in agricultural context

Most of the natural habitat loss is caused by direct human soil use transformation in connection with agriculture, like deforestation and conversion of forest into agricultural land or pasture, or secondary transformation from traditional to industrial size. The consequences are multiple and can lead to desertification is some regions3. In a recent article by Landis4, the author explains the importance of biodiversity within landscapes, showing how landscape simplification lead to ecosystem service losses and defends the cause for redesigning the landscapes in a coordinated way. According to the article, “highly intensified landscapes typically occur where soil, climate and technological resources coexist to support high yields”. In other words, an extreme simplification happens mostly where reunite optimal conditions forgive huge changes in the functions of the ecosystem.

The introduction of symptom-remediation measures as systematic application of fertilizers, irrigation, pesticides, and so on maintain and can also increase yields, and the creation of large surfaces allows a high mechanical efficiency. The immediate losses in biodiversity in one field and its surroundings, or losses in soil material due to local erosion are measurable but do not hinder the growth of the crops. As these methods extend, the wild or natural life-friendly habitats get smaller and finally isolated from each other (Fig. 2). It is to remind that these resources must be available in order to continue with this system. In regions where they are scarcer, further deforestation is often the preferred way to remediate to the loss of decreasing yields. In both cases, the long-term draw backs begin to have a noticeable effect after a certain size is reached. Establishing one or few “biodiversity oasis” is good, but often, the geographical distance and the obstacles remain. Their establishment can be criticized as an inefficient, palliative measure of mere aesthetical value. So how to approach the development of agriculture in a sustainable way?

Biodiversity increase and sustainability: A matter of scale

The growth of crops is influenced by a multitude of factors, ranging from the local availability of nutrients and water, the stability and structure of the soil, up to larger scale factors as microclimate, each scale has its own features that ultimately influence plant growth, as shown in Figure 3. To understand their interwovenness and level of influence is a first step to develop ecosystem services benefiting agriculture on the long run. 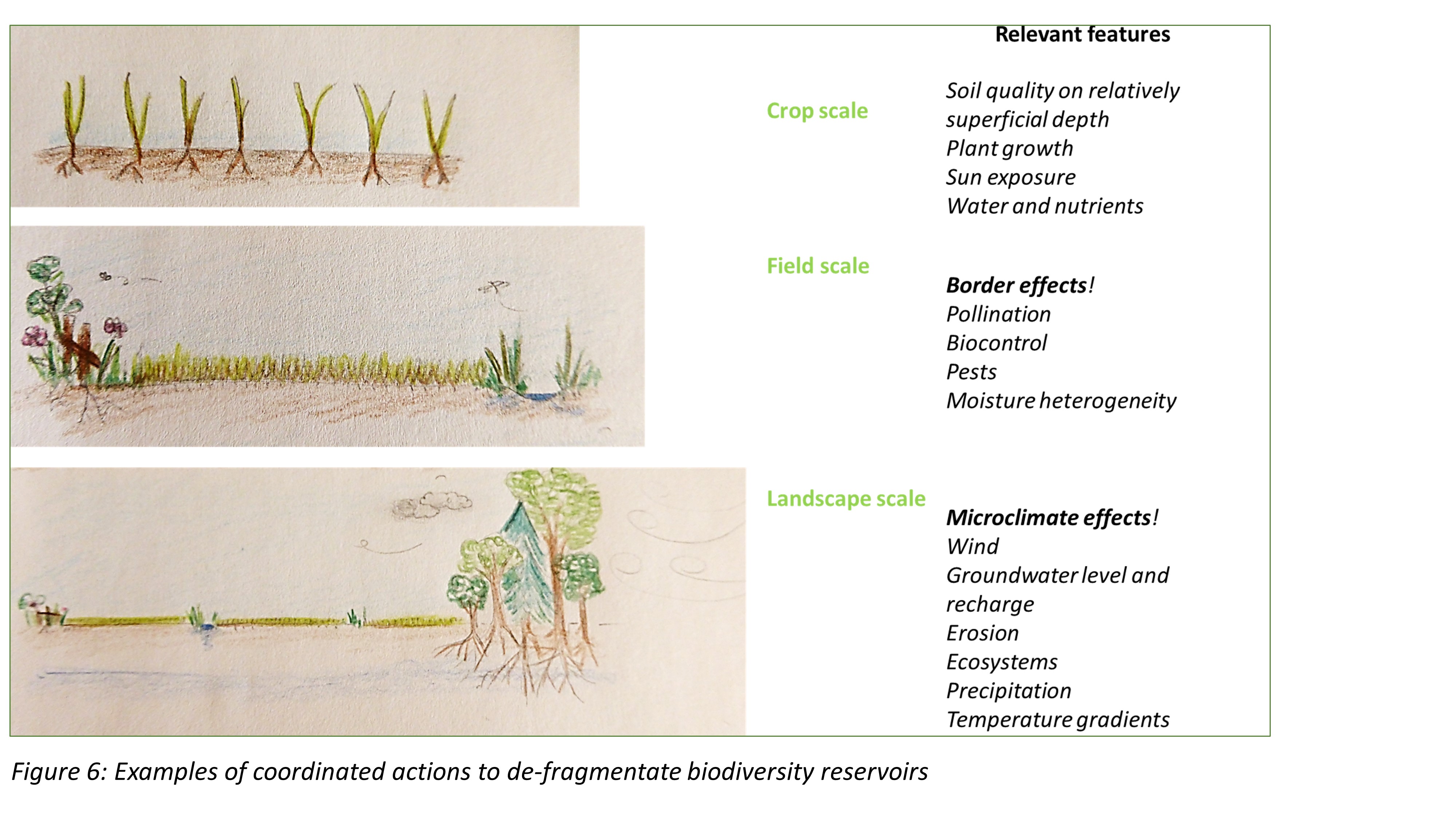 If we consider the field scale, the whole landscape, i.e., in the case of an agricultural landscape, the surrounding fields and possibly present wild hotspots, water areas, roads, etc. are part of the picture. To show the importance of considering that whole landscape for the outcome of one single field, it can be useful to compare it with a population in relation to a contagious disease. It is true that a multitude of factors influence contagion and resistance, and, similarly, landscapes and ecosystems are more complex than depicted but the following simplified scheme is a guide to understand the importance of the scale and the connectivity.

The virus, the pollinator and the pest Similarly, a wide area covered by annual monocultures, especially if treated with biocides, form biodiversity deserts, due to the lack of species that can thrive under these uniform, temporary conditions. These deserts shield fields with pollinator-friendly management from accessing the richness of pollinator hotspots and the presence of biocontrol agents. Their diversity is hindered or reduced by the group effect. The threshold of minimal percentage of coverage depends on the agent and how easily and how far it travels. It depends also on the distance between the hotspots and their number and less from their size. Therefore, a smaller number of surfaces that do not support biodiversity does not hinder the propagation of beneficial insects and other animals and plants, as the pollinator-friendly managed fields act as corridors. The agents can find enough hosting sites and can reproduce and spread.

Pests, on the other side, could be seen in the same way, and it is legitimate to wonder if the corridors for beneficial insects, would not be also used by pests, thereby endangering cultures instead of promoting them. While this is certainly true for invasive species or diseases, that profit from “anthropogenic corridors” like commercial ships, to overcome the natural barriers formed by oceans or mountain chains, the situation is different at a landscape scale. Fields covered with very large monocultures of the same species, sometimes even the same clone, is actually the most suitable design for the spread of a pest (cf. fig 5). In this case, fields act as gigantic pest corridors. Commercial exchanges can then bring the pest to the next monoculture of the same type, as it happened for banana plantations all over the world, more than once during this last 60 years. The story of the Cavendish banana, and the now spreading Tropical Race 4 (TR4) could become a textbook example and has been recently analyzed5. While different solutions are discussed, including the highly praised gene editing6, it points out to the core problem of huge plantations of cloned trees as an “intrinsically unstable way of doing things”. Indeed, even with a solution to TR4, the basic conditions are still unchanged, allowing the next pathogen to take hold the same way. Moreover, while diversity is an essential factor for the survival and health of pollinators, monotony is one key factor for the fast multiplication of pests. One could argue that wild zones could act as refuges during pesticide and eradication campaigns, thereby justifying the very design of these large monocultures. But in the same way, they can also host several other organisms, including potential predators of these pests.

While neither a diverse nor a monoculture completely eliminate pest incidence, the spread is limited by diversity for geographical and predation reasons, while a uniform landscape can only contain it with the help of invasive techniques. The landscape biodiversity design both breaks the monoculture corridor strategy and promotes the pollinator spread. Additionally, biodiversity within the cultures offers, if well planned, an increased resistance of the plants to their potential pests and virus outbreaks7-9.

The other similarity between the immunization and the pollination is the illusion of insignificant consequences of individual changes on the global situation, causing the illusion that any choice is equivalent, when a gradual change in the population or within a region is slowly moving towards the threshold. Hence, a coverage of immunization far above the threshold means that a few individuals not immunized will not change the overall group protection and therefore the idea may spread that immunization is generally an exaggerated precaution and therefore facultative. However, the more individuals share this behavior, the more the population as a whole moves toward the threshold, where the protective effect of group disappears. An analog reasoning can be done with pollination and biodiversity. As long as only few spots and fields are managed in a pollinator deleterious way, the biodiversity hotspots and corridors still exist and pollinators can fulfill their functions, finding enough surface for reproduction, feed and shelter. The illusion of the facultative presence of pollinators and wild spots is still possible. But as the proportion of uniform surfaces increases, or, in other words, as the landscape simplifies, the threshold for pollinator support and movement is reached, and only then significant effects of the lack of pollinators are felt.

It is important to grasp that the same is also true for the opposite progression. If only a few spots are given back biodiversity, their number, surface or distribution may not be sufficient to overcome the threshold, and their utility may be put in discussion and their establishment even reversed. This is the reason why a coherent and coordinated action for the establishment of biodiversity reservoirs4 is so important.

Re-connecting isolated biodiversity hotspots and increasing their number is essential for the survival of pollinators and other beneficial organisms. Even if they might host pests, the latter are not subject to an increased, unidirectional selection pressure as in large monocultures and thus less likely to become uncontrollable, as feared with increasing antibiotic resistance10. Different approaches can be considered, from reducing geographical distances between wild zones by introducing perennials, biological cultivations, hedges, preserving natural river sides and ponds, wild edges to form wild corridors, to overcoming obstacles that are difficult and/or dangerous to cross with bridges or tunnels where possible (Figure 6). Furthermore, biodiversity increases with gradual changes in managements of cultures – in particular polycultures, and though reducing and suppressing biocides, etc. The number and connectiveness of fragments are as important as the size of fragments themselves. Hence, even small patches can help a broad insect diversity thriving11. In this perspective, all kinds of landscapes, including urban areas bear an equally important potential and have an essential role to play in conservation12, 13. There is not one plan fits it all in terms of strategies of de-simplification. Depending on the depth of the wanted or needed action, small changes as wild flower strips on field edges to reconversion to organic polycultures on a whole region scale, all degrees are possible, given that they keep in mind all possible steps. These can include, but are not limited to: Reducing the geographical distances between wild zones by introducing perennial plants, reducing or eliminating invasive species, encourage organic cultivations, plant hedges, preserve or reconstruct wild edges along paths, rivers, forests and fields. It is also important to overcome, where possible, obstacles that are difficult and/or dangerous to cross with bridges or tunnels. The change can be planned to be gradual, and eventually include cultivations themselves, promoting polycultures, reducing and suppressing biocides, etc. This can be an efficient, little time and effort consuming solution towards a more sustainable agriculture, where cultivated areas themselves act as wildlife corridors and refuges. But most importantly, it is most efficient with a coordinated action over several places, to reach the “wild corridors”-threshold as fast as possible.

The population dynamics of pollinators and other beneficial wildlife are happening on field scale within a landscape scale. To enlarge the vision of the extensive positive impacts of vegetal biodiversity and landscape change, it is worth looking at other features, that are influenced at a higher scale (Figure 3). Microclimate, precipitation patterns and groundwater recharge are some of the features that happen at that level, as it is known from forests in any climatic zone14. If changes happen over whole landscapes, and happen in a coordinated way, it is only a small step to go further and picture the effects on global climate or water distribution that are possible.

As the importance of ecosystem services like pollination or microclimate becomes increasingly clear, it is equally important to plan solutions whose impact is up to the size of the issue. To de-fragmentate our landscape for the sake of beneficial insects in particular, and resilience of our livelihoods in general, coherent and coordinated strategies are a must to establish a network of wildlife hotspots in the agricultural landscape, on the way towards an agriculture that is itself a biodiversity promoter and – as experience grows- a climate influencer.