Who has not even once wished to go back in time? Have this one chance again? To make it better this time? We have the deep need to feel powerful about our future and our human or physical environment.
There is this one clock that we can actually turn back:

This clock was first a picture by the artist Martyl Langsdorf (wife of the atom physicist and Manhattan Project research associate and Szilárd petition signatory Alexander Langsdorf, Jr.) on the cover of the 1947 Bulletin of the Atomic Scientists issue. It was meant to draw the attention on the dangers of atomic weapons and our responsibility for human kind, setting symbolically midnight for human extinction through an atomic war.
Following the same model, an environmental doomsday clock survey exists since 1992 (http://www.af-info.or.jp/en/questionnaire/clock.html). Each year the The Asahi Glass Foundation “conducts a survey of the sense of crisis felt by respondents about the continuance of the human race as the global environment continues to deteriorate, gauging the responses with the time expressed on the hands of the Clock”. Its hands also moved back and forth with the years, with a dramatic jump forward last year.

While this is sometimes controversial because the non-quantitative “time measurement “is somehow arbitrary and subjective, it is nevertheless a powerful image and reminder how local and global human decisions and actions bring us closer – or further from our own extinction.
We might feel completely powerless facing world events and climatic catastrophes, and watch anxiously, resigned or indifferently the “clock” ticking and bringing us closer to midnight. Many say it’s almost too late, so how do we reply to the run against the clock? This is not a bomb about to explode, but a mechanism we can accelerate, slow down or even reverse and redirect.

It is most straight forward to look at the effects that bring the clock forward – pollution, deforestation, global warming to name a few – and focus on stopping or at least reducing those effects. While this is difficult enough it is also necessary. But with the clock as a mental picture, this would, in the best case, slow down the mechanism, or leave it immobile.
Therefore i suggest to look further, and view our future actions and research as a new mechanism to bring in, in order to replace the previous one. Weight in actions that can reverse the movement, until the balance switches back, environment restored and regenerates.

And there is actually a lot that can be done. From re-thinking energy consumption , re-shaping agriculture, optimizing water use on big scale, viewing ecology as the economy of nature and using it as a model of circular paths for energy and resources, the possibilities are multiple and the starting points numerous. But, always with the same picture in mind, these actions have to be more than shy attempts or superficial green-paintings – it has to outweigh the other side of the balance…
It is an ambitious and arduous path, but it is possible, given fast action. We have “two minutes” from now, 2019.
Where will you weight in to change the direction? 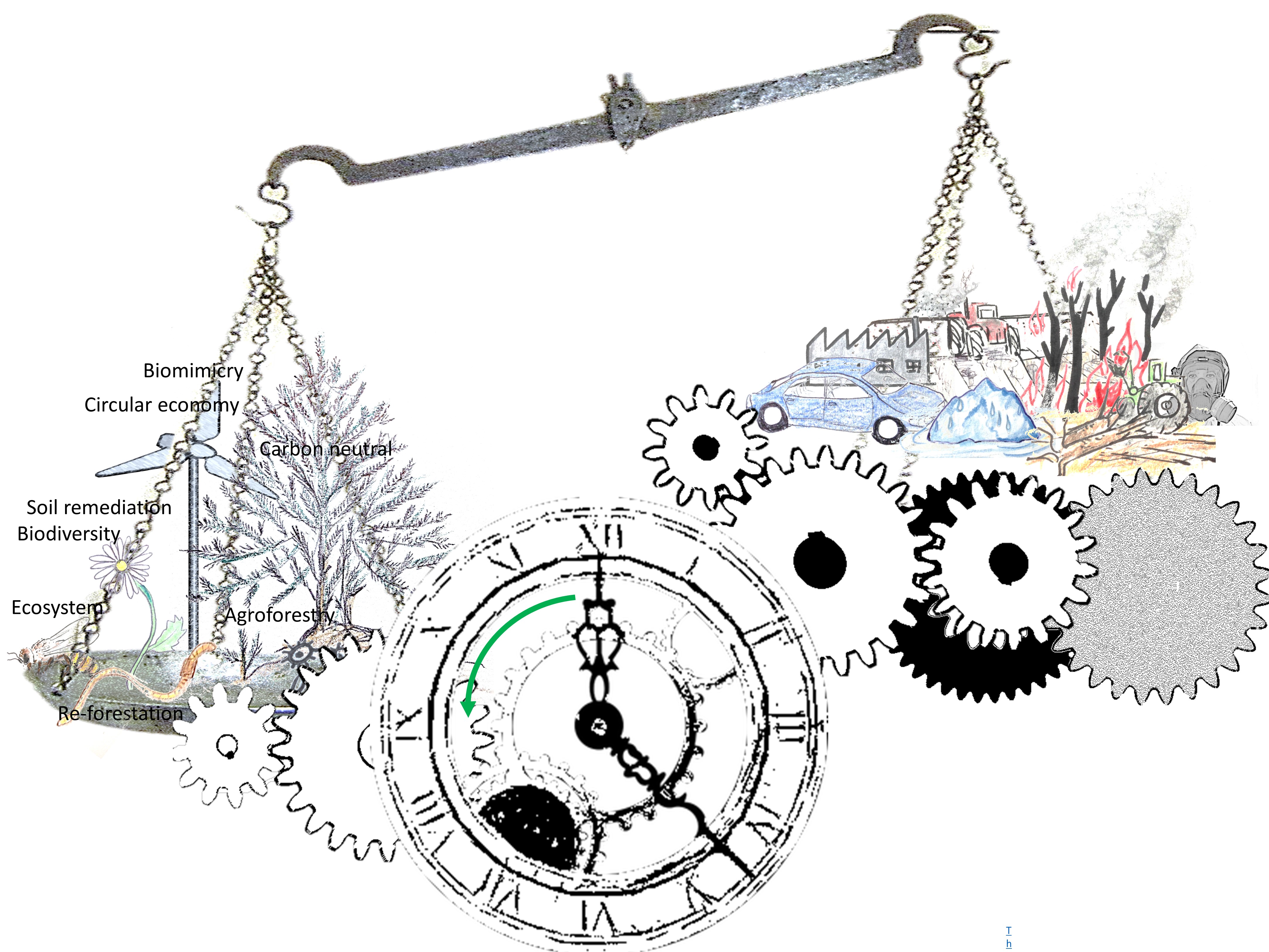 “The best time to plant a tree was 20 years ago. The second best time is now.”